skip to main | skip to sidebar

I finished the project I'd been working on all summer, and now I'm writing up the pattern. As part of my quest for better photographs, I'm going to have a friend model it on Sunday, so I hope the pattern will be out early next week.

I saw some guerilla knitting in downtown San José last night. Evidently, it's been there a while. 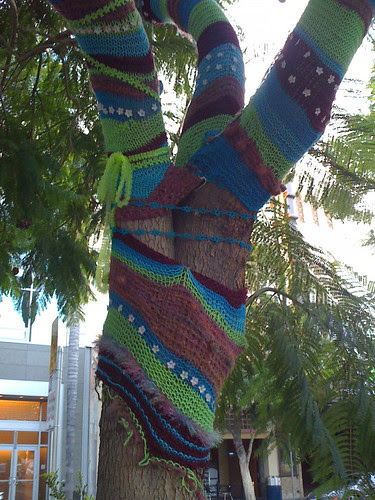 It's not often I can cross post to both of my blogs, but maybe some day I'll find some local organic wool and knit something with it. I brought home a bunch of wheat stalks from Saturday's harvest at Live Earth Farm, and this morning I finally sat down and made my corn dolly. 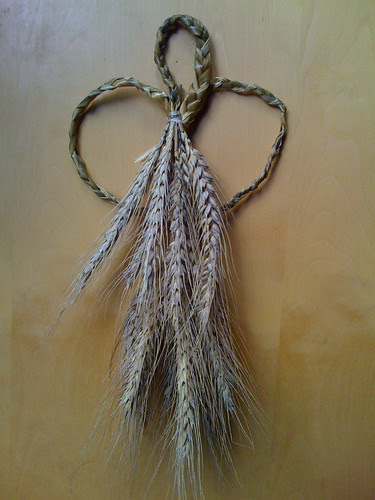 While it would have been prettier with less smutty wheat, and while practice obviously makes perfect, I think it will be a nice ornament for the farm. I'm going to give it to Debbie, who runs the CSA, at the pickup this afternoon. I feel compelled to add that I don't ascribe to it any of the pagan magickal abilities I read about while searching online for instructions.

And one day, it would be fun to make some of the shapes I remember from the Renaissance Faire of the late 70's.

And how could I forget this morning to talk about the latest Interweave Knits? Well, one particular thing. Leaving aside the photo of the Barcelona jacket that made the model's head look as tiny as a very tiny thing, indeed, it's this deeply weird ad that caught my eye. 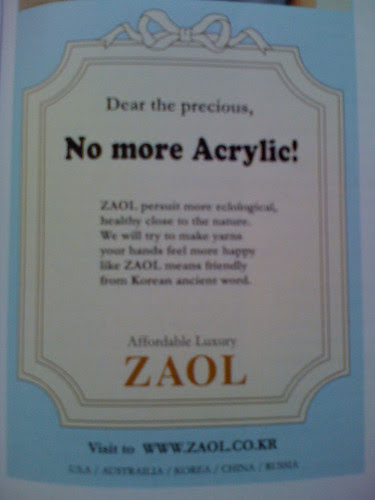 In case it's too blurry, it says

Doesn't IK offer proofreading as part of their services? Did anyone else notice this ad? I looked on Ravelry, but all I saw were a couple posts looking for a sweater pattern.
Posted by alce at 6:50 PM 4 comments:

I'm home again, back in the late-summer-before-school-starts routine.

While I was on my last vacation, I knitted up the alpaca I bought in Canada, using a pattern from the new VK that had arrived in my mailbox at just the right time. I had bought the yarn to make a thank-you gift for the friend I had visited in Kingston. 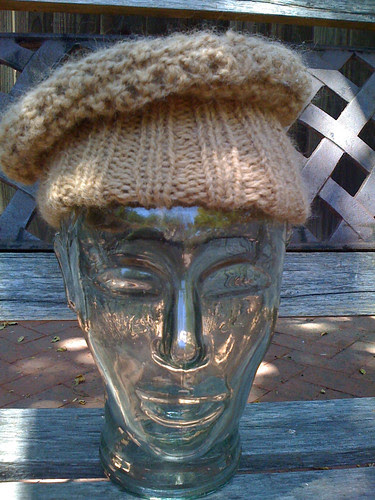 She was, in fact, flying back to Australia on Sunday, with an 11 hour layover that we were going to use for a whirlwind visit in San Francisco. We did manage to do that (spending an hour at the Academy of Sciences and having a lovely dinner at Waterbar) but I managed to forget to bring the hat along to give it to her. Fortunately, her husband is still working in Santa Cruz, and I'll have lunch with him on Thursday, so there is still a chance to have it hand carried Down Under (where it is winter, a large part of the reason I made it.) Failing that, I do know that the USPS will take it for me.

As for the hat itself, the alpaca yarn is much bulkier than the pattern calls for, but, since the tam is started from the center, I just kept knitting until the circle was big enough, then did the one decrease round and ribbed until I ran out of yarn. The brim is folded over, and I bound it off together with the inside stitches instead of sewing it. This was, in part, because I didn't have my little notions box along with me in Capitola (but mainly because I love to find ways to do everything without sewing.) It's a cute pattern, and the alpaca will make it pretty darn warm for those fierce Aussie winters.

I also do know that there is a yarn store in Capitola, and I even visited same when I needed to borrow a crochet hook to pick up some laddered-down stitches on my other project. (See lack of notions box, above.) Since I am almost physically unable to leave a yarn store without buying anything (especially when I've come in and borrowed a tool) I got a couple balls of Soxx Appeal.

It's a funny thing that I can't think of a yarn store around here where I could walk in and say "What's the most local yarn you've got?" and expect to find anything. I will freely admit that our agricultural riches don't extend far into the fiber world, but that doesn't mean that there isn't any locally-produced yarn around here. Nine Rubies does prominently feature Baywood yarns, which are locally hand dyed. But with the huge interest in local food production, you'd think that some store in the South Bay would seek out what exists and feature it. I'll mention that to Beth at Green Planet the next time I'm there.

And, along these same lines, if your interest in the products of sheep goes beyond wool to cheese and meat, I encourage you to check out Rebecca King's "Adopt a Ewe" program. Rebecca has started an organic dairy down in Watsonville, where she keeps a herd of happy sheep on a beautiful green hillside. Her cheeses are delicious, and she also sells delicious organic lamb. Farmers don't have a steady paycheck, and Rebecca has come up with this idea to help her with an infusion of capital up front. In return for $500 during the last half of 2009 (when the sheep are not producing milk) subscribers will receive six monthly deliveries of cheese and milk starting in January 2010, plus either a whole lamb (custom butchered, and Rebecca's butcher makes excellent sausage) or an organic wool and cotton comforter. Plus invitations to special farm events (Rebecca used to be a chef at Cafe Gabriella in Santa Cruz.)

She's a great person who is working hard to bring good food to the world in a way that treats the land and her animals right. If you're in the area, I hope you'll take a look.
Posted by alce at 7:38 AM No comments:

Aleph Null
A cozy cowl, with warmth that goes on and on.
Click here to purchase the pattern for US$5.00

Krampus
The perfect stocking to fill with coal.
Click here to purchase the pattern for US$5.00

Hand on My Heart
Lacy fingerless gloves, shaped with a heart at the base of the thumb.
Click here to purchase the pattern for US$2.50

Perchta
A Victorian-style buttoned collar, with cables, lace and ruffles.
Click here to purchase the pattern for US$2.50

Ochiba
A seamless skirt, knit from the top down, in a wide range of sizes. The pattern is written as a simple template, requiring just your hip measurement.
Click here to purchase the pattern for US$2.50.

Cachiyuyo
A leafy little scarf that grows organically out of foundation crochet stitches.
Click here to purchase the pattern for US$2.50.

Jocelyn
Feminine, lacy mitts with a shaped thumb gusset.
Click here to purchase the pattern for US$2.50.

Diagonal Stripe Kimono
One size, knit in Noro Silk Garden
Click here to purchase the pattern for US$5.00.

Quietude
A fitted, empire-waist babydoll knit in silk and kid mohair.
Click here to purchase the pattern for US$5.00.

Ruffles
A fitted pullover or sheath dress with set in sleeves and waist shaping, crocheted seamlessly from the top down.
Click here to purchase the pattern for US$5.00.

Balai
A beret in two-color broomstick crochet, worked in the round.
Click here to purchase the pattern for US$5.00.

Gallivant
A flirty skirt, crocheted from side-to-side.
Click here to purchase the pattern for US$5.00.

Mittens for Lise
Stretchy mittens to fit an adult.
Click here for the pattern.

Three-in-one Baby Pattern
Knit from the top down to make a hood, a cardigan, or a bunting.
Click here for the pattern.

Twirly Cushion Cover
Pillowcase knit circularly from the center out.
Click here for the pattern.

Two-color broomstick crochet in the round